How COMATCH is Piloting Flash Organizations

Hendrik is the Director of Marketing and Communications at COMATCH. Previously, he worked as a consultant for Homburg & Partner.

Over the course of COMATCH’s history, Marketing and Communications has always played an important role in the company’s success. However, they have remained two separate teams. But in 2019, we decided to merge the teams—giving us the chance to pilot Flash Organizations at COMATCH.
Flash Organizations are temporary teams of experts built to execute complex projects. Roles within the team are based on individual skill sets. The team is formed within a very short time period—often with the help of technology. Upon completion of a project, the team dissolves.
To establish a new structure for the Marketing and Communications team, we looked at two concepts that challenge the setup of traditional organizations. The first one is Flash Organizations—helping us to embrace the increase in project work. The second one is Holacracy—enabling us to create an organizational framework around projects.
Holacratic Organizations are structured in circles. The circles take full ownership of their topic and exist on different levels—from strategy to operations—and are connected from top to bottom by circle members who communicate with each other openly. Every circle consists of multiple roles, which should be defined by the circle. Employees may be part of multiple circles and therefore have multiple roles and responsibilities.
When the Marketing and Communications teams merged, we had three goals in mind.
1. To create across-the-board accountability for results by distributing decision-making power.
2. To speed up delivery by creating independent project capsules.
3. To maximize individual development by working together in cross-functional teams.
Our first step was to create a common understanding of the conceptual basics and of our specific requirements. As a starting point, we defined our role within the COMATCH organization: what do we want to achieve and how?

We redefined the role of a project manager. This person should be fully accountable for the results of the project, but would be chosen based on competence rather than title.

We decided to adopt a Flash Organization mindset. A guiding principle for us was to reduce daily routine tasks to a minimum and adopt project setups wherever it made sense. Fortunately, we were drawing from a larger pool of talent with our mixed team of PR and marketing specialists. We also actively sourced project support beyond department boundaries.
The next step was to redefine the role of a project manager. This person should be fully accountable for the results of the project, but would be chosen based on competence rather than title. This means a senior employee could be reporting to a junior staff member. 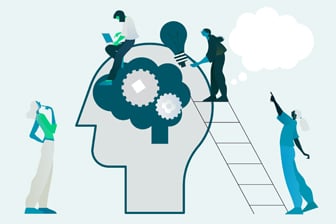 Finally, we decided to become more holacratic. Although, we maintained our titles, we implemented the concept of circles. Within the COMATCH logic, Marketing & Communications represents a department. In a holacratic organization, this is a circle that is further divided into sub-circles. Each sub-circle had the obligation to define its long-term plan and set quarterly focus topics. This meant it was fully accountable for the success of its own project scope. Project teams executed outside of the circle but were obligated to report back.
So how did we do? We are aware that we’re on a continuous journey and that perfection won't happen overnight. But, two years later, we are working together as one coherent team, using Flash Organizations to ensure project success, and collaborating cross-functionally with other departments—to me this seems like pretty good progress.